At a joint press conference with Szijjarto, Selakovic said that he signed the Protocol on Collocation with the Minister of Foreign Affairs of Hungary today, as well as three very important memoranda that accompany that document.

The Minister said that communication is established on a quarterly level, adding that it is envisaged that Serbia and Hungary use the premises of the embassy of the other country in places where one of the two countries does not have its own diplomatic and consular mission.

He underlined that Serbia and Hungary are fighting together against the coronavirus pandemic and congratulated Hungary on the successes it has achieved in that field lately.

Selakovic expressed gratitude for the selfless help of that country to Serbia in the form of medical equipment and ventilators intended for the Clinical Centre of Vojvodina and in Senta, but also for the help that was sent from Hungary to Banja Luka.

According to his assessment, the economic cooperation with Hungary is at an exceptional level, and the trade exchange between the two countries last year increased by €1.940 billion.

He pointed out that the joint implementation of projects in the field of infrastructure, traffic and economy continues, adding that the first part of the Belgrade-Budapest railway is being built rapidly, and that the first section from Belgrade to Novi Sad will be completed next year.

Szijjarto pointed out that in recent years, the two countries have shown what good neighbourly relations mean and how both sides can benefit from those relations, adding that one of the best examples of relations towards a national minority is the one that Serbia has with Hungary on its territory.

Speaking about infrastructure, he underlined that it is of great importance to connect the gas pipelines of the two countries and announced that by October Hungary will complete 15 kilometres of gas pipelines, which is needed to connect to the gas system coming through Serbia.

Szijjarto also said that COVID passports cannot be discriminatory and that Hungary does not accept that only a vaccine approved by the competent European competent institution be recognised, but that vaccines that are approved at the national level should be accepted in the future. 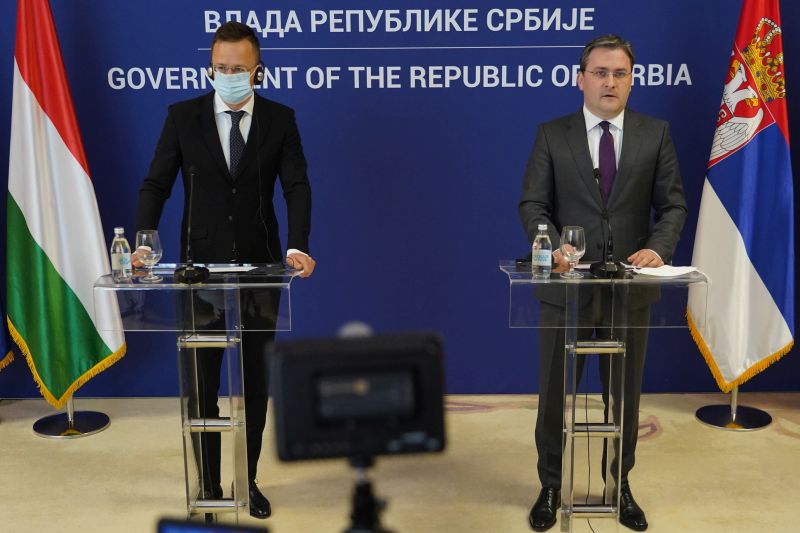