Minister for European Integration Jadranka Joksimovic assessed today that the European Commission's report on Serbia's progress on the road to the EU is mostly well-balanced and good for Serbia in the sense that there is no area in which deterioration was noted. 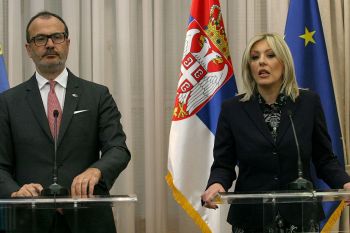 Joksimovic said at a joint press conference with Head of the EU Delegation in Serbia Sem Fabrizi that this report will be important for EU member states so that they could decide how many chapters Serbia can open at the Intergovernmental Conference at the end of June.

This document provides enough good arguments so that the Member States accept and support the opening of several chapters, she stressed, and voiced hope that more than two will be opened.

According to Joksimovic, the fact that Serbia has sent constitutional amendments to the Venice Commission and adopted a prosecution strategy for war crimes on 4 April will be very important for the assessment of reforms, but this, however, was not evaluated in the report as it was done after the reporting period.

Joksimovic noted that the report evaluates economic reforms as good, which is a fact since macroeconomic stability has been achieved, public debt dropped significantly, while inflation is controlled.

Speaking about the work on regional cooperation, the Minister for European Integration stated that the important and responsible role of Serbia in the region, in good neighbourly relations and in the endeavours to maintain stability has undoubtedly been recognised.

Fabrizi said that this and next year will be crucial for Serbia's accession to the EU, stressing that Serbia's path to the EU is already a reality.

He said that EU is Serbia's biggest trading partner and the first donor and recalled that over the next six years, Serbia will receive €1.5 billion in grants.

At the same time, Fabrizi announced the visit of High Representative of the European Union for Foreign Affairs and Security Policy Federica Mogherini to Belgrade tomorrow, explaining that this visit aims to highlight the EU's commitment to the European path of Serbia.
Share: Twitter Facebook