Serbia key to stability in region

Prime Minister Aleksandar Vucic and Republika Srpska President Milorad Dodik pointed out during today's meeting in Belgrade to the importance of maintaining peace and stability in the region and the importance of implementation of joint economic projects. 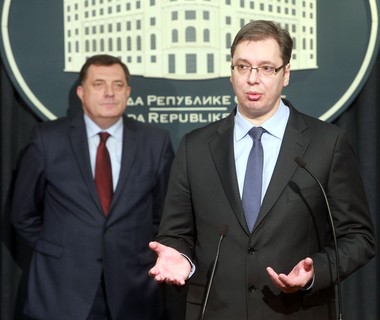 Milorad Dodik and Aleksandar Vucic
At a joint press conference with Dodik in the Government of Serbia, Vucic said that they talked about global issues, primarily related to the treatment of different military alliances.

Speaking about economic projects, the Prime Minister pointed out that they are progressing well and in accordance with the planned deadlines.

He stressed that this is primarily related to the work on the bridge Ljubovija-Bratunac, and that they also talked about the roads Bijeljina-Belgrade, Bijeljina-Sremska Mitrovica and Višegrad-Uzice.

I think that at the next joint session of the two governments of Republika Srpska and Serbia, we will adopt conclusions on how to prepare project documentation and start works in 2017, he said.

Serbia and Republika Srpska will jointly mark 75 years since the Independent State of Croatia (NDH) and the Jasenovac concentration camp, site of the heaviest and the biggest pogrom in the history of our nation, with a series of events, both in Belgrade and in Banja Luka, but also in Jasenovac, if we are allowed, Vucic said.