First Deputy Prime Minister and Minister of Foreign Affairs Ivica Dacic that two Serbian embassy staffers, who were abducted on 28 November, were killed in US airstrikes on an Islamic State base in Libya. 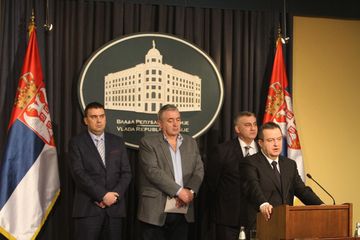 Author: Fonet
Dacic told an extraordinary press conference that the information is yet to be officially confirmed by the Libyan authorities after the identification process.

Unfortunately, we received the information on Friday afternoon that several foreign nationals were killed in the attack, including the two staffers of our embassy, Dacic told a news conference.

The information is yet to be officially confirmed by the Libyan authorities after the identification process. We cannot be completely sure, but we got the photographs that indicate clearly that the information is most probably true, Dacic said.

The driver and communications officer,Jovica Stepic and Sladjana Stankovic, were abducted in November last year.

He stated that he informed about the death of the driver and official of the Embassy of Serbia in Libya Jovica Stepic i Sladjana Stankovic their families and that Prime Minister Aleksandar Vucic spoke to them. In the coming days, we will organise transportation of their bodies and burial in Serbia and the commemoration at the Ministry Foreign Affairs, he said.

The First Deputy Prime Minister said that Serbia will demand an explanation from the US government and Libyan authorities.

We will ask for official information and explanation from Libya and the United States. This morning we talked with representatives of the US Embassy in Serbia, Dacic said, adding that no one from Washington informed official Belgrade that the attack would be carried out.

According to Dacic, the majority of victims are Tunisians in Libya, and the target was the camp that is suspected to belong to the Islamic state. We received the information on the exact location from the Security Intelligence Agency, explained Dacic.

Dacic said that Serbia has done everything it could to have the two Serbian nationals releasaed, and that from the moment of the kidnapping we had continuous contact with the Libyan security service and that a positive outcome was expected.

He pointed out that according to all available information, it was a criminal group believed to be associated with the Islamic state and that has to do with Islamist organisations.

Also, the First Deputy Prime Minister said that Serbia was considering whether the embassies in Damascus, Tripoli and other cities in the Middle East should be closed down.

Author: Fonet
Chief of Security at the Security Intelligence Agency (BIA) Ivan Todorov said that the BIA and the Libyan partner agencies came to the site and the group that is associated with the Islamic state.

Todorov said that the Serbian intelligence services and partner services had a location, and that the local authorities were waiting for the right moment for a serious action.