Deputy Prime Minister and Minister of Construction, Transport and Infrastructure Zorana Mihajlovic said today that there are several current projects to build a modern railway, whose value is approximately €2.5 billion. 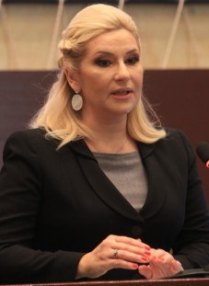 Author: Fonet
Mihajlovic said at the opening of the inaugural conference of the South East Europe Strategic Alliance for Rail Innovation (SEESARI) that the current value of the project amounts to €1.5 billion, while the construction of the Belgrade-Budapest railroad will increase the value by another approximately €1 billion.

She pointed out that the projects of Serbian Railways are on the European transport map, and added that it is our task to think about innovations that we can apply in this field.

According to Mihajlovic, the goal is that Serbian Railways becomes a modern company with a modern infrastructure, which is why reforms, rehabilitation of railway lines and construction of new tracks have been started.

Serbia needs regional connections, given that it is located on the transit corridor, Mihajlovic said, adding that we must make the best use of it.

The conference, organised by the International Union of Railways (UIC), Serbian Railways and Traffic Institute Ljubljana, gathered more than 60 participants from almost 40 railway companies, organisations, institutions and companies from all over Europe.