First Deputy Prime Minister and Minister of Foreign Affairs Ivica Dacic stated today that Serbia will not allow the return of refugees to its territory and will take appropriate measures if some neighbouring countries make one-sided moves. 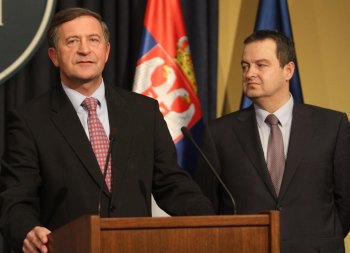 Karl Erjavec, left, and Ivica Dacic at today's press conference
Author: Fonet
After a meeting of Serbian Prime Minister Aleksandar Vucic and Minister of Foreign Affairs of Slovenia Karl Erjavec, which Dacic attended, he said at a joint press conference with Erjavec that Serbia will react if Croatia, Slovenia and Austria make one-sided moves with regard to migrants.

The First Deputy Prime Minister recalled that Serbia has received 35,000 migrants since the beginning of the year, which is 6,000 more than between January and May last year.

He explained that the Slovenian Minister of Foreign Affairs came to Serbia to inform the Prime Minister about the initiative of Slovenian Prime Minister Miro Cerar, which he addressed to President of the European Commission Jean-Claude Juncker and prime ministers of the countries on the Balkan migration route, about the need to find a common response to the expected increase in the number of migrants.

Dacic said that it is important that countries of the region be mutually informed about the measures and activities undertaken, and reiterated that Serbia seeks and expects the EU to establish and define a clear European policy on this issue.

The First Deputy Prime Minister stressed that Serbia is against unilateral actions of any state, and declared that all measures will have to be part of a single European policy.

He pointed out that the border closure, the reduction of the reception power and other one-sided measures in connection with the Schengen Agreement announced by Austria will trigger chain reactions along the entire Western Balkan route.

Dacic said that such measures will most likely cause a reaction by Slovenia and then Croatia. This will necessarily lead to Serbia undertaking certain measures and activities, the First Deputy Prime Minister said and underlined that it is important to avoid unilateral solutions.

Erjavec noted that the relations between Serbia and Slovenia are getting better and better, and said that he is very pleased that Slovenia has supported Serbia on its path towards the European Union and in the opening of chapters 32 and 35.

He said that he came to Belgrade to present the initiative of Slovenia's Prime Minister Miro Cerar in connection with the migration crisis, and pointed to the fact that in less than four months 420,000 migrants arrived in Slovenia.

We know that we are to expect an increased wave of migrants in the coming months. Unfortunately, there is no common European solution and that is why the Prime Minister of our country has come up with the initiative on how we could solve this problem, Erjavec stated.
Share: Twitter Facebook