Minister of Foreign Affairs Nikola Selakovic spoke today with his Danish counterpart Jeppe Kofod, to whom he expressed gratitude for that country’s support to the European integration of Serbia.

Speaking at a joint press conference with the Danish Minister of Foreign Affairs, Selakovic underlined that there is great room for the further improvement of the political and economic cooperation between the two countries.

He said that a special attention was paid during the meeting to Serbia’s economic success and the reforms made and added that he informed his interlocutor about our progress in the field of the rule of law, the freedom of the media and everything that is important on our European agenda.

Selakovic also briefed Kofod on the “Open Balkans” initiative, which gives the opportunity to the region to focus on the future, on what connects us – to work much more for the future of all citizens through the improvement of economic cooperation.

The Minister pointed out that Denmark and Serbia are connected by over 100 years of diplomatic relations.

The two ministers also discussed geopolitical issues and migration and agreed to institutionalise political consultation of the foreign ministries of Serbia and Denmark, as well as to sign a memorandum of understanding at the next meeting.

Kofod said that Serbia had an excellent response to the crisis caused by the coronavirus pandemic, and particularly commended economic results of our country.

He stated that Denmark decided to provide one million doses of vaccines for the Western Balkans, especially to the countries that are less successful than Serbia.

Serbia is a close partner to Denmark, I hope our partnership and relations will progress and become stronger, the Minister said and reiterated that there is great potential for the development of bilateral economic cooperation.

According to Kofod, Denmark is dedicated to the European integration of Serbia and it notices a positive progress in the fields of the rule of law and the freedom of the media. A considerable advancement in the harmonisation of regulations of Serbia with the EU acquis is also visible.

Kofod stated that Denmark wants to continue dialogue with Serbia and voiced hope that it will soon be able to reciprocate the hospitality to his Serbian counterpart, whom he invited to visit Denmark. 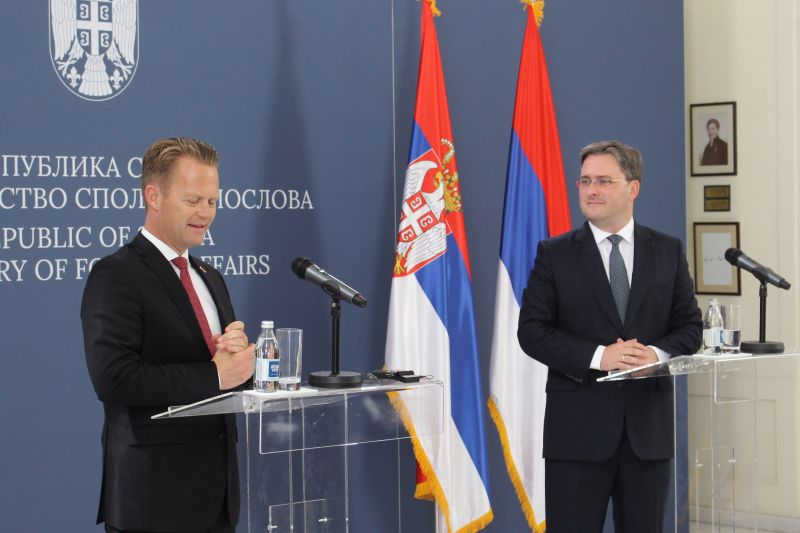