President of the Republic of Serbia Aleksandar Vucic and Chairman of the Serbian part of the Presidency of Bosnia-Herzegovina Milorad Dodik visited today the Torlak Institute for Virology, Vaccines and Sera, where the first series of control doses of the Sputnik V vaccine were filled yesterday.

The delegation that visited Torlak also included Minister of Health Zlatibor Loncar and Director of Torlak Vera Stoiljkovic, after which Vucic delivered to Dodik a donation for Republika Srpska, consisting of 20,000 doses of the AstraZeneca vaccine.

The Serbian President announced that a meeting will be held tomorrow regarding the expansion of capacity of the Torlak Institute, in which the state will invest funds.

He said that the first doses of the Russian vaccine made by Torlak should be released between 5 and 10 June, and expressed his conviction that by the end of the year Serbia will be able to produce vaccines on its own.

Vucic stated that more than three million citizens have been vaccinated in Serbia, of whom 1.8 million received the first dose, and over 1.2 million both doses.

He assessed that in two weeks Serbia will have 1.8 million revaccinated citizens, and voiced hope that we will be able to speed up the vaccination process considerably as soon as we procure a considerably greater amount of vaccines, which is expected to take place by the end of April.

Specifically, another 211,000 doses of the Pfizer vaccine will arrive in Serbia on Monday, 50,000 of the second component of Sputnik V arrived yesterday and the same amount is expected tomorrow.

In addition, the delivery of another 100,000 of the first component of Sputnik V is expected on Monday or Tuesday, and the Chinese Sinopharm vaccine is expected to arrive by the end of April, the Serbian President said and underlined that these are important things that mean life, not only for us, but also for the entire region. 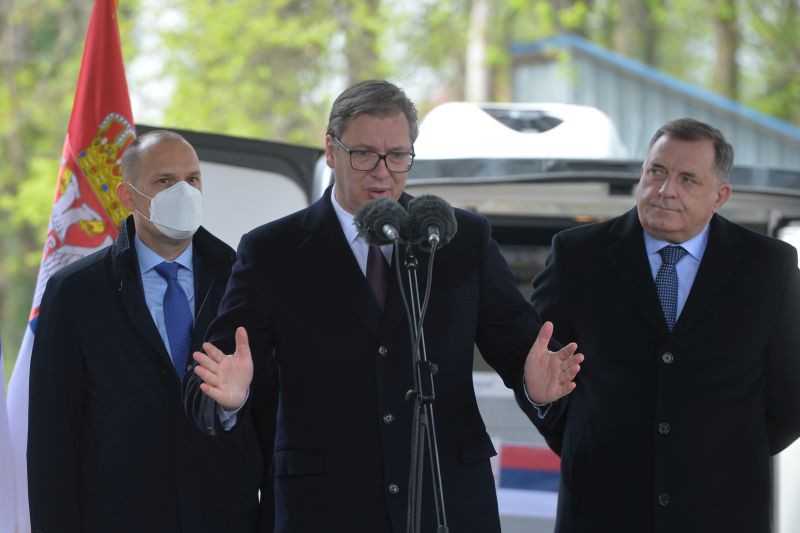