Prime Minister Ana Brnabic pointed out today that there will be enough vaccines available for all citizens who want to be vaccinated against coronavirus.

During the visit to the University Children's Clinic "Tirsova", where the vaccination of health workers started today, Brnabic emphasized that Serbia has agreements with various manufacturers for eight million doses, which is enough for four million people.

I believe that only that number will be enough, but if necessary, we will have additional quantities, said the Prime Minister and added that health workers are being vaccinated throughout Serbia.

She pointed out that so far approximately 9,300 people have been vaccinated in the first two priority categories – gerontology centres and health workers, which is a satisfactory level.

The Prime Minister stated that it is planned to speed up the programme of vaccination of citizens in the coming days, noting that the plan for mass immunisation will be adopted by the crisis response team next week.

Brnabic expressed the expectation that the first vaccination point will be opened at the Belgrade Fair by the end of next week, adding that from tomorrow, citizens will be able to apply to the system through which they will be able to express their desire to be vaccinated.

The system was established in cooperation with the Office for Information Technologies and Electronic Administration, the Prime Minister said, adding that from 14 January, citizens will be able to apply through the contact centre.

The Prime Minister conveyed that Serbia will receive 18,525 additional doses of the Pfizer-BioNtech vaccine tomorrow, emphasising that the relevant Chinese institutions have approved the export licence for Sinofarm vaccines, and that an additional half a million doses of the Sputnik V vaccine are expected.

We have all the preconditions to start mass vaccination, the Prime Minister said, adding that Serbia will have two million doses of vaccines from various manufacturers by the end of January, including the quantities that arrived at the end of December, with another 1.3-1.5 million expected in February.

I hope that we will be able to finish the vaccination by May or June. If we succeed, we will be one of the first countries in Europe to finish it, Brnabic pointed out.

The Prime Minister also announced that a session of the crisis response team will be held tomorrow, at which new measures would be adopted or a decision would be made to extend the existing measures to suppress the spread of coronavirus. 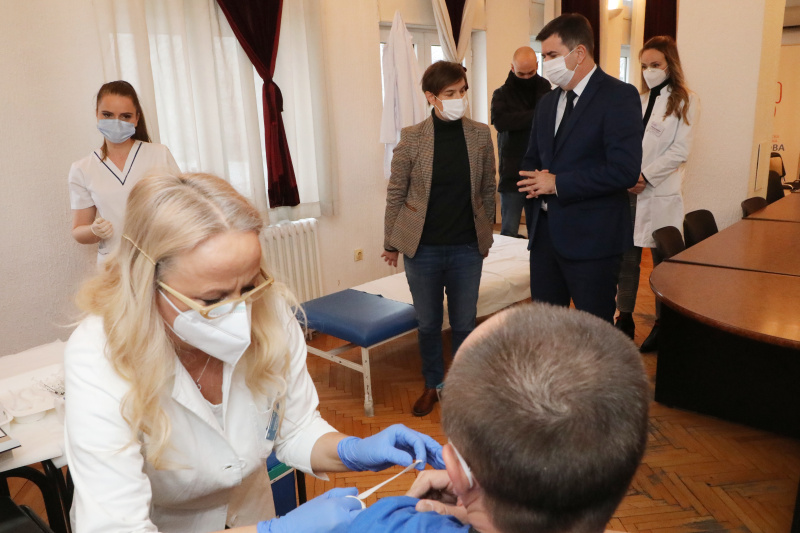