Increase in number of coronavirus cases expected within next 72 hours

President of the Republic of Serbia Aleksandar Vucic said late today that an increase in the number of coronavirus infections is expected within the next 72 hours, noting that Belgrade, Cuprija, Cacak and Valjevo have the largest number of new reported cases.

He said the decision was made to ban the gatherings of more than two people as of tonight, and from Saturday at 13.00, a ban on movement will be introduced until Monday at 05.00.

Unfortunately, more deaths can also be expected in the next two days, the President said, explaining that this is not a prediction, but something that is logical to expect given the number and condition of people on ventilatory support.

We have noticed in the last three days since we have increased testing that there is a greater percentage of those that test positive and that people with symptoms are mostly from these four cities - Belgrade, Cuprija, Cacak and Valjevo, Vucic said.

He added that it seems that Nis, after many difficult cases, managed to get stabilised, although the possibility of new infections is not ruled out.

Vucic said he spoke with Russian President Vladimir Putin in the afternoon and that tomorrow the first plane with equipment, ventilators, medicines and other supplies, as well as with eight doctors and other staff, people who disinfect the facilities, will arrive in Belgrade.

I think that is the same package that was sent to Italy, and that is why we owe full gratitude to Russia, because it shows how much they care about Serbia when it is not easy for them either, the President said.

He also said he had a great conversation with French President Emmanuel Macron, who is a sincere friend of Serbia and who, at Vucic’s plea, will ask a pharmaceutical company to deliver 50 kilograms of raw material so that Serbia’s Galenika could produce chloroquine locally.

He will answer within the next 48 hours and he promised to help Serbia in every possible way, Vucic underlined.

The Serbian President added that on 8 or 9 April Serbia will have a full production of surgical masks for its needs. 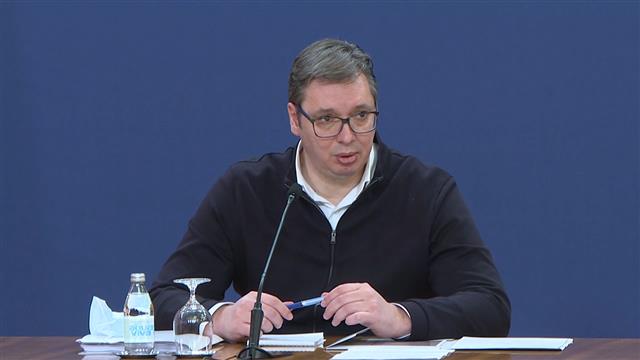