Deputy Prime Minister and Minister of Mining and Energy

Deputy Prime Minister and Minister of Mining and Energy

She was born on 5 May 1970 in Tuzla. After graduating from the First Economics School in Belgrade, as a student of the generation, she enrolled at the Faculty of Economics, where she graduated in 1993 and received her doctorate in 2001 in the field of energy and economics.

She became Assistant Professor at the University of John Nesbitt in 2008, Associate Professor and Vice-Rector for Science in 2011, and was elected as a full-time professor in 2016.

She is the author and co-author of four books in the field of energy and sustainable development. She has published more than two hundred papers on the problems and possibilities of the development of the Serbian energy sector.

She worked in the First Economics School, EPS-Elektroistok, at Nikola Tesla Airport and the University of John Nesbitt, where she is still employed. From 2004 to 2006, she was the Advisor to the Deputy Prime Minister of the Republic of Serbia for Energy. She was the Energy Adviser to Republika Srpska Prime Minister Milorad Dodik from 2010 to 2012.

From 2012 to 2014, she was the Governor of Serbia at the European Bank for Reconstruction and Development (EBRD).

She was elected Minister of Energy, Development and Environmental Protection in 2012.

From 2014 to 2020 she was the Deputy Prime Minister and Minister of Construction, Transport and Infrastructure.

The portfolio of the ministry, headed by her, has the infrastructure projects in the value of approximately €16 billion.

During the same term, she was appointed the President of the Coordination Body of the Government of the RS for Gender Equality, as well as the responsible person on behalf of the Government for the issue of Roma inclusion. She chairs the Joint Government Group of the RS with the task of defining specific measures for improving the position of the Republic of Serbia on the World Bank Doing Business list and the Council of Foreign Investors. She is the President of the Coordination Body for supporting the monitoring of project implementation, investing in the reconstruction and/or construction of clinical health centres.

Since 2018, she is a member of the Advisory Board of the World Bank for Gender Equality and Development, the body responsible for reviewing the progress achieved in gender equality at the global level and recommending activities to empower women and reduce the gap between women and men.

From the establishment of the Ministry of Construction, Transport and Infrastructure in 2014, more than 200 km of new highways have been built, more than 200 km of railroads have been reconstructed, public enterprise reforms have been started and a major step forward has been made in harmonization of domestic legislation in the field of traffic and construction with the rules applicable in the European Union. A special achievement is the implementation of comprehensive reforms in the field of construction, which resulted in Serbia's progress from 186th to the 10th place in the world for issuing of building permits on the Doing business list of the World Bank and improvement of the overall rating of the country on the list from 91th to 43rd place in three years.

In her twenty-five-year professional career, she received more than 200 acknowledgments, charters and recognition, among which the "Reformer of the Year" in the selection of the National Alliance for Local Economic Development (NALED) is one of the most significant ones. She received this award for the first time in 2014 for comprehensive building licensing reforms, and the second award, "Reformer of 2016", was awarded to her for decade of reforms in this area.

She is the winner of the international award "Personality of the Year and the Best Minister for the Year 2018", which is awarded to the most successful personalities in the region, which was handed over to her in July 2018 in Sarajevo.

Her hobbies are swimming, carting, flower growing and humanitarian work.

She is a member of the Council of the University of Belgrade and the Management Board of the Development Fund. She is the founder of NGO Women's Government, a member of the European Movement in Serbia and the East West Bridge organization. She is the initiator of the initiative "Let Us Employ Thousands of Women in the Rural Areas", which is implemented by the Coordinating Body for Gender Equality in cooperation with Ethno-Network and NALED.

She is the mother of one son. 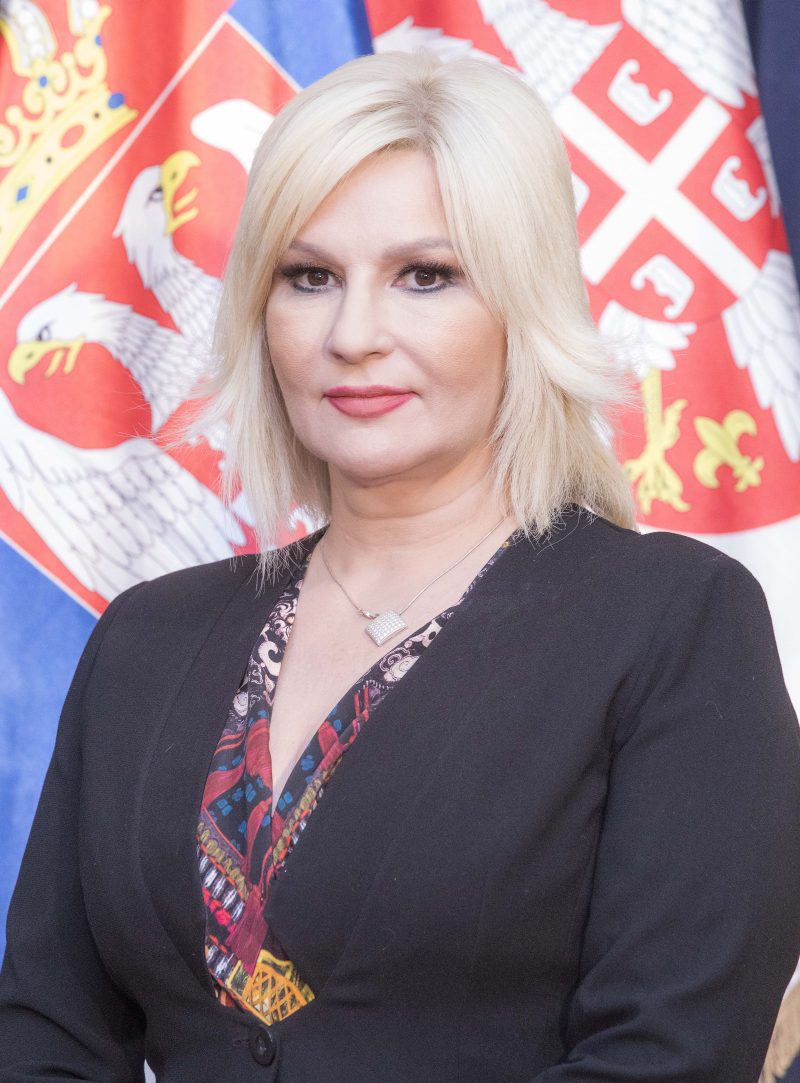